U.S. Treasuries are offering a lesson in supply and demand.

Last week, Barron’s reported, “The law of supply and demand meant that the glut of new Treasuries temporarily drove down prices and pushed up yields. The 10-year Treasury climbed during the week – brushing 2.95 percent – but ultimately lost half a basis point, ending at 2.87 percent. (A basis point is a hundredth of a percentage point.)”

The Treasury increased its debt issuance to fund tax reform and the two-year federal budget. Reuters reported, “…tax reform is expected to add as much as $1.5 trillion to the federal debt load, while the budget agreement would increase government spending by almost $300 billion over the next two years.”

A surplus of Treasury bonds, in tandem with decreased demand as the Federal Reserve reduces the holdings it accumulated during quantitative easing, could push Treasury rates higher. In addition, MarketWatch reported the Federal Reserve appears to be committed to gradually increasing the Fed funds rate to avoid an overheating economy and keep inflation down.

Higher interest rates may be coming. 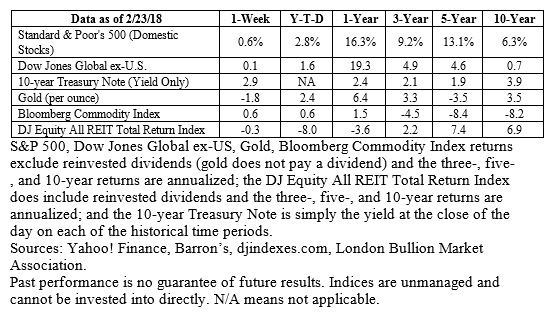 OLYMPIC ATHLETES HAVE TO PAY THE BILLS, TOO. Not every American Olympian and Paralympian is a household name. Money.com reported, “These athletes don’t have the same kind of lucrative sponsorship deals as Olympic standouts like snowboarder Shaun White or alpine skiing star Lindsey Vonn – so they have to make ends meet, which can often mean squeezing in extra shifts during the off season, heading to the gym early in the morning before work and moving from a full-time position to a part-time one with no replacement for those lost wages.”

So, how do lesser-known athletes pay the bills while training?

• Sled hockey player Josh Pauls is a sales account executive. His teammate Steve Cash is a personal banker.
• Pairs figure skater Chris Knierim works as an auto mechanic and wants to have his own auto shop someday.
• Biathlon competitor Lowell Bailey is a singer and songwriter who plays in bluegrass bands.
• Curling team member Nina Roth is a registered nurse. Her teammate Tabitha Peterson is a pharmacist.
• Snowboarder Jonathan Cheever is a licensed plumber.
• Luger Emily Sweeney is a member of the National Guard, and so is bobsledder Nick Cunningham.
• Short track speed skater Jessica Kooreman has a real estate license.
• Luger Justin Krewson is a firefighter.
• Snowboarder Mike Schultz designs and engineers prosthetics.
• Nordic skier Kendall Gretsch works in tech support.

There is a lot to admire about Olympic and Paralympic athletes.

Weekly Focus – Think About It
“There are only three ways to meet the unpaid bills of a nation. The first is taxation. The second is repudiation. The third is inflation.”
--Herbert Hoover, 31st President of the United States

* These views are those of Carson Group Coaching, and not the presenting Representative or the Representative’s Broker/Dealer and should not be construed as investment advice.
* This newsletter was prepared by Carson Group Coaching. Carson Group Coaching is not affiliated with the named broker/dealer.
* Government bonds and Treasury Bills are guaranteed by the U.S. government as to the timely payment of principal and interest and, if held to maturity, offer a fixed rate of return and fixed principal value.  However, the value of fund shares is not guaranteed and will fluctuate.
* Corporate bonds are considered higher risk than government bonds but normally offer a higher yield and are subject to market, interest rate and credit risk as well as additional risks based on the quality of issuer coupon rate, price, yield, maturity, and redemption features.
* The Standard & Poor's 500 (S&P 500) is an unmanaged group of securities considered to be representative of the stock market in general. You cannot invest directly in this index.
* All indexes referenced are unmanaged. Unmanaged index returns do not reflect fees, expenses, or sales charges. Index performance is not indicative of the performance of any investment.
* The Dow Jones Global ex-U.S. Index covers approximately 95% of the market capitalization of the 45 developed and emerging countries included in the Index.
* The 10-year Treasury Note represents debt owed by the United States Treasury to the public. Since the U.S. Government is seen as a risk-free borrower, investors use the 10-year Treasury Note as a benchmark for the long-term bond market.
* Gold represents the afternoon gold price as reported by the London Bullion Market Association. The gold price is set twice daily by the London Gold Fixing Company at 10:30 and 15:00 and is expressed in U.S. dollars per fine troy ounce.
* The Bloomberg Commodity Index is designed to be a highly liquid and diversified benchmark for the commodity futures market. The Index is composed of futures contracts on 19 physical commodities and was launched on July 14, 1998.
* The DJ Equity All REIT Total Return Index measures the total return performance of the equity subcategory of the Real Estate Investment Trust (REIT) industry as calculated by Dow Jones.
* Yahoo! Finance is the source for any reference to the performance of an index between two specific periods.
* Opinions expressed are subject to change without notice and are not intended as investment advice or to predict future performance.
* Economic forecasts set forth may not develop as predicted and there can be no guarantee that strategies promoted will be successful.
* Past performance does not guarantee future results. Investing involves risk, including loss of principal.
* You cannot invest directly in an index.
* Stock investing involves risk including loss of principal.
* Consult your financial professional before making any investment decision.