It was not a good week for stocks.

Some pundits have been drawing comparisons between the performance of the Dow last Friday and Black Monday, the memorable day in 1987 when the index shed 508 points in a single day.

They may be barking up the wrong tree.

Yes, the Dow lost more than 600 points on Friday. That was about 2.5 percent of its value. On Black Monday a lesser drop equated to a 22 percent loss for the Dow. In addition, Black Monday was widely attributed to program trading gone awry. The culprit behind last Friday’s fall is likely to be bonds, according to Barron’s.

“Equity investing involves a delicate balance of three things: earnings, interest rates and valuation. Over the past decade, low long-term bond yields have played a crucial role in helping elevate equity valuations… ‘You have to consistently show economic and earnings growth to justify these valuations at higher rates,’ says Nicholas Colas, cofounder at DataTrek. ‘People forget how closely tied economic and profit growth is to rising rates – it is a horse race and profit growth has to win – even if just by a little.’”

News about employment and wage gains added fuel to the fire of investor worries. In January, the United States experienced its strongest wage growth since 2009. While that’s good news for workers, it may cause the Fed to raise rates more aggressively in an effort to keep inflation manageable. 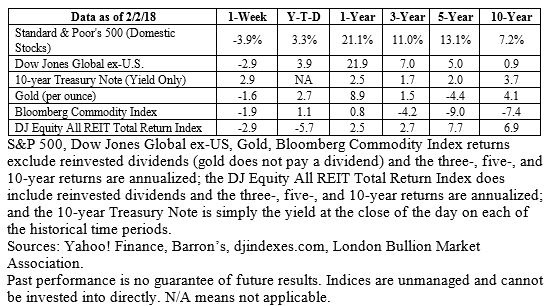 WHAT DOES SUCCESS MEAN TO YOU? For some, having a big following on social media translates as success. NASA, which has more followers than any other government organization worldwide (28 million), may be considered successful. Of course, NASA doesn’t hold a candle to Katy Perry, who has close to 106 million followers.

It will surprise few to learn the U.S. Treasury, which manages the money resources of the United States, doesn’t have many followers (770,000); however, it has more than the Federal Reserve (446,000).

It’s almost enough to make you wonder whether Americans care about money. They do, but on a more personal level. A corporate survey, Making It in America, queried Americans about what it means to reach “…a level of success, comfort, and security that you find wholly satisfying.” As you might expect, there were a variety of answers.

One gauge of success is income, according to about two-thirds of the respondents. The group’s average income was $57,426 a year. They would know they’d ‘made it’ when they earned about $147,000 a year. According to CNBC, annual income of $150,000 would put many people in the middle class, depending on where they lived and the size of their households. It’s notable few people aspire to join the ranks of the wealthiest Americans. More than three-fourths said they would not want to earn more than one million dollars a year.

Of course, money is not the only measure of success. A Pew Research study found just 11 percent of those surveyed thought wealth was an essential part of the American dream. Far more important were:

One participant said, “Even though I truly believe that having money is freedom, money is really just a tool to make experiences in life possible.”

“You can’t reach for anything new if your hands are still full of yesterday’s junk.”
--Louise Smith, NASCAR driver

* These views are those of Carson Group Coaching, and not the presenting Representative or the Representative’s Broker/Dealer, and should not be construed as investment advice.
* This newsletter was prepared by Carson Group Coaching. Carson Group Coaching is not affiliated with the named broker/dealer.
* Government bonds and Treasury Bills are guaranteed by the U.S. government as to the timely payment of principal and interest and, if held to maturity, offer a fixed rate of return and fixed principal value.  However, the value of fund shares is not guaranteed and will fluctuate.
* Corporate bonds are considered higher risk than government bonds but normally offer a higher yield and are subject to market, interest rate and credit risk as well as additional risks based on the quality of issuer coupon rate, price, yield, maturity, and redemption features.
* The Standard & Poor's 500 (S&P 500) is an unmanaged group of securities considered to be representative of the stock market in general. You cannot invest directly in this index.
* All indexes referenced are unmanaged. Unmanaged index returns do not reflect fees, expenses, or sales charges. Index performance is not indicative of the performance of any investment.
* The Dow Jones Global ex-U.S. Index covers approximately 95% of the market capitalization of the 45 developed and emerging countries included in the Index.
* The 10-year Treasury Note represents debt owed by the United States Treasury to the public. Since the U.S. Government is seen as a risk-free borrower, investors use the 10-year Treasury Note as a benchmark for the long-term bond market.
* Gold represents the afternoon gold price as reported by the London Bullion Market Association. The gold price is set twice daily by the London Gold Fixing Company at 10:30 and 15:00 and is expressed in U.S. dollars per fine troy ounce.
* The Bloomberg Commodity Index is designed to be a highly liquid and diversified benchmark for the commodity futures market. The Index is composed of futures contracts on 19 physical commodities and was launched on July 14, 1998.
* The DJ Equity All REIT Total Return Index measures the total return performance of the equity subcategory of the Real Estate Investment Trust (REIT) industry as calculated by Dow Jones.
* Yahoo! Finance is the source for any reference to the performance of an index between two specific periods.
* Opinions expressed are subject to change without notice and are not intended as investment advice or to predict future performance.
* Economic forecasts set forth may not develop as predicted and there can be no guarantee that strategies promoted will be successful.
* Past performance does not guarantee future results. Investing involves risk, including loss of principal.
* You cannot invest directly in an index.
* Stock investing involves risk including loss of principal.
* Consult your financial professional before making any investment decision.