Last week, the United States government might as well have hung a sign on the front door of the Capitol that read, “Gone negotiating. We’ll be back in…however long it takes.”

In 2013, the U.S. government closed for 16 days. About 850,000 federal workers were furloughed and 6.6 million workdays lost. The shutdown affected private companies that worked with the government, too, and the U.S. economy took a hit.

The prospect of kicking off 2018 with a government shutdown didn’t appear to concern investors too much. Barron’s reported the Dow Jones Industrial, Standard & Poor’s 500, and NASDAQ indices all finished the week higher.

The lack of response from investors isn’t all that surprising. Geopolitical events – from the Brexit vote to the U.S. bombing Syria to the North Korean nuclear escalation – have had little lasting effect on markets. The president of a financial research firm told The New York Times, “geopolitical events may be widely feared, and there will often be a knee-jerk market reaction when they’re unexpected, but seldom do they have a lasting impact. Underlying economic trends and monetary policy are far more important.”

That has been the case with previous U.S. government shutdowns. However, Investor’s Business Daily (IBD) wrote this time might be different:

“Government shutdowns always have been primarily over government spending, but this one will be mostly over an ideological divide on immigration, with budget issues playing a secondary role. That raises the risk that the partial government shutdown could be a long one and have more serious economic consequences than investors expect.”

IBD suggested it wouldn’t be long before the negative economic effects of dysfunctional government consume any economic gains delivered by tax reform. That may provide an incentive for our elected officials. 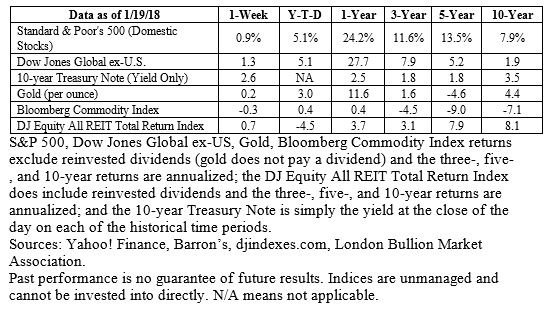 I’LL HAVE AN ORDER OF PURCHASING POWER PARITY, PLEASE! Purchasing power parity, or PPP, is a simple idea with a tongue twister of a name. When two countries have PPP, a basket of goods costs the same amount in both countries after the exchange rate has been factored in.

The Economist developed an entertaining measure of PPP. It’s called ‘The Big Mac Index.’ The index doesn’t measure a basket of goods. It simply considers the cost of a hamburger in 120 countries around the world. The index was updated for January 2018 and showed burger costs varied when translated into U.S. dollars. For example:

The Economist reported:
“If the local cost of a [hamburger] converted into dollars is above $5.28, the price in America, a currency is dear; if it is below the benchmark, it is cheap. The average cost of a [hamburger] in the Euro area is €3.95, or $4.84 at the current exchange rate. That implies the euro is undervalued by 8.4 percent against the dollar.”

Overall, PPP is better aligned across the globe. One reason is the improving health of world economies. China remains the most undervalued currency among wealthier nations. In emerging markets, like Russia, currencies remain undervalued relative to the United States.

PPP provides economists with an apples-to-apples measure for comparing the wellbeing of countries and consumers.

Weekly Focus – Think About It
“For anything worth having one must pay the price; and the price is always work, patience, love, self-sacrifice – no paper currency, no promises to pay, but the gold of real service.
--John Burroughs, American naturalist and essayist

* These views are those of Carson Group Coaching, and not the presenting Representative or the Representative’s Broker/Dealer, and should not be construed as investment advice.
* This newsletter was prepared by Carson Group Coaching. Carson Group Coaching is not affiliated with the named broker/dealer.
* Government bonds and Treasury Bills are guaranteed by the U.S. government as to the timely payment of principal and interest and, if held to maturity, offer a fixed rate of return and fixed principal value.  However, the value of fund shares is not guaranteed and will fluctuate.
* Corporate bonds are considered higher risk than government bonds but normally offer a higher yield and are subject to market, interest rate and credit risk as well as additional risks based on the quality of issuer coupon rate, price, yield, maturity, and redemption features.
* The Standard & Poor's 500 (S&P 500) is an unmanaged group of securities considered to be representative of the stock market in general. You cannot invest directly in this index.
* All indexes referenced are unmanaged. Unmanaged index returns do not reflect fees, expenses, or sales charges. Index performance is not indicative of the performance of any investment.
* The Dow Jones Global ex-U.S. Index covers approximately 95% of the market capitalization of the 45 developed and emerging countries included in the Index.
* The 10-year Treasury Note represents debt owed by the United States Treasury to the public. Since the U.S. Government is seen as a risk-free borrower, investors use the 10-year Treasury Note as a benchmark for the long-term bond market.
* Gold represents the afternoon gold price as reported by the London Bullion Market Association. The gold price is set twice daily by the London Gold Fixing Company at 10:30 and 15:00 and is expressed in U.S. dollars per fine troy ounce.
* The Bloomberg Commodity Index is designed to be a highly liquid and diversified benchmark for the commodity futures market. The Index is composed of futures contracts on 19 physical commodities and was launched on July 14, 1998.
* The DJ Equity All REIT Total Return Index measures the total return performance of the equity subcategory of the Real Estate Investment Trust (REIT) industry as calculated by Dow Jones.
* Yahoo! Finance is the source for any reference to the performance of an index between two specific periods.
* Opinions expressed are subject to change without notice and are not intended as investment advice or to predict future performance.
* Economic forecasts set forth may not develop as predicted and there can be no guarantee that strategies promoted will be successful.
* Past performance does not guarantee future results. Investing involves risk, including loss of principal.
* You cannot invest directly in an index.
* Stock investing involves risk including loss of principal.
* Consult your financial professional before making any investment decision.