There was a lot to be thankful for last week.

The question is, “Have markets become overripe?’ As you might expect, opinions on the matter vary:

• Jim Paulsen, chief investment strategist at the Leuthold Group, told CNBC, “I don't see the elements of a bear market but I certainly think 2018 can bring us a correction or at least just a more challenging market.”

• David Lebovitz, global market strategist with J.P. Morgan Asset Management, wrote in Barron’s, “Healthy earnings growth suggests that there is still upside in U.S. equities, but this area of the global equity market is most expensive relative to its long-term average. However, history has shown us that expensive stock markets can get more expensive before they get cheaper, as multiples tend to expand in the final stages of a bull market.”

• Peter Boockvar, chief market analyst at the Lindsey Group, told CNBC, “This boat is now standing room only…I still can't figure out why some think there is no euphoria in markets when one has to go back 30 years to see this wide a spread between bulls and bears.”

Boockvar was referring to an early November Investors Intelligence Sentiment Survey, which gauges the attitudes of U.S. advisors. CNBC reported 63.5 percent of those surveyed were bullish and just 14.4 percent were bearish. A gap of 30 points is a sign of elevated risk, while a 40-point difference suggests defensive measures may be appropriate.

Individual investors aren’t quite as confident. Last week’s AAII Sentiment Survey showed 35.5 percent were bullish, 29 percent were bearish, and the remainder were neutral. It’s important to note, there was a distinct shift toward bullishness and away from bearishness in last week’s survey. 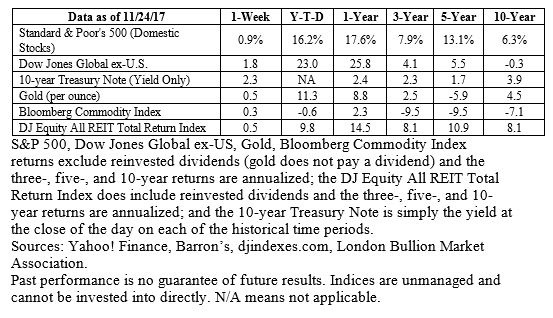 AND SOME PEOPLE WORRY ABOUT ZOMBIES. Turkeys have played a central role in the history of the United States. In a letter to his daughter, Ben Franklin offered praise for the bird, which he called, “…a true original native of America…(though a little vain and silly tis true, but not the worse emblem for that) a bird of courage, and would not hesitate to attack a grenadier of the British guards who should presume to invade his farm yard with a red coat on.”

He was correct about turkeys’ aggressive streaks, but lately they haven’t been after the British. Nope. Turkeys have been terrorizing Americans. WBUR in Boston reports turkeys, which had disappeared from New England in the 1800s, have been successfully reintroduced to the region.

The victory isn’t being celebrated in all quarters, though. According to reports, turkeys seem to prefer suburbia where they’ve been “clashing with residents who say they destroy gardens, damage cars, chase pets, and attack people.”

The problem isn’t unique to Massachusetts.

In fact, turkey aggression has become so acute wildlife officials have offered the equivalent of a wild turkey survival guide. First, they recommend, cover windows and shiny objects (turkeys may respond aggressively to sparkly items and their own reflections). Second, Americans who are being intimidated by turkeys should not “...hesitate to scare or threaten a bold, aggressive turkey with loud noises, swatting with a broom, or water sprayed from a hose. A dog on a leash is also an effective deterrent.”

Climbing trees is not an effective way to escape the menacing fowl. Domestic turkeys cannot fly, but wild turkeys can soar at speeds of up to 55 mph for short distances, according to LiveScience.com. Next time you spot a rafter of turkeys, remember: “Turkeys in the wild are far stronger and faster than the ones that land on Thanksgiving tables.”

* These views are those of Carson Group Coaching, and not the presenting Representative or the Representative’s Broker/Dealer, and should not be construed as investment advice.
* This newsletter was prepared by Carson Group Coaching. Carson Group Coaching is not affiliated with the named broker/dealer.
* Government bonds and Treasury Bills are guaranteed by the U.S. government as to the timely payment of principal and interest and, if held to maturity, offer a fixed rate of return and fixed principal value.  However, the value of fund shares is not guaranteed and will fluctuate.
* Corporate bonds are considered higher risk than government bonds but normally offer a higher yield and are subject to market, interest rate and credit risk as well as additional risks based on the quality of issuer coupon rate, price, yield, maturity, and redemption features.
* The Standard & Poor's 500 (S&P 500) is an unmanaged group of securities considered to be representative of the stock market in general. You cannot invest directly in this index.
* All indexes referenced are unmanaged. Unmanaged index returns do not reflect fees, expenses, or sales charges. Index performance is not indicative of the performance of any investment.
* The Dow Jones Global ex-U.S. Index covers approximately 95% of the market capitalization of the 45 developed and emerging countries included in the Index.
* The 10-year Treasury Note represents debt owed by the United States Treasury to the public. Since the U.S. Government is seen as a risk-free borrower, investors use the 10-year Treasury Note as a benchmark for the long-term bond market.
* Gold represents the afternoon gold price as reported by the London Bullion Market Association. The gold price is set twice daily by the London Gold Fixing Company at 10:30 and 15:00 and is expressed in U.S. dollars per fine troy ounce.
* The Bloomberg Commodity Index is designed to be a highly liquid and diversified benchmark for the commodity futures market. The Index is composed of futures contracts on 19 physical commodities and was launched on July 14, 1998.
* The DJ Equity All REIT Total Return Index measures the total return performance of the equity subcategory of the Real Estate Investment Trust (REIT) industry as calculated by Dow Jones.
* Yahoo! Finance is the source for any reference to the performance of an index between two specific periods.
* Opinions expressed are subject to change without notice and are not intended as investment advice or to predict future performance.
* Economic forecasts set forth may not develop as predicted and there can be no guarantee that strategies promoted will be successful.
* Past performance does not guarantee future results. Investing involves risk, including loss of principal.
* You cannot invest directly in an index.* Stock investing involves risk including loss of principal.
* Consult your financial professional before making any investment decision.