A lot happened during the third quarter of 2017, but not much changed.

The bull market in U.S. stocks continued to charge ahead. Traditional measures of valuation continued to suggest the market is overvalued, but some analysts argued it’s different this time. The Economist explained:

“The current [cyclically-adjusted price-to-earnings] ratio of 31 suggests that stocks are about 50% over-valued – a figure that has only been exceeded in the past 60 years during the dot-com bubble. Bulls argue that the S&P 500’s constituents can justify this heady valuation. Big American companies are wielding increased market power, enabling them to earn outsized profits at the expense of America’s customers.”

The bull market in U.S. bonds continued. Interest rates on 10-year Treasury bonds were lower at the end of September than they were at the start of the year, despite the Federal Reserve increasing rates in March and June. The Fed also has indicated it will soon begin to unwind its balance sheet, which includes about $4.5 trillion in Treasury bonds, mortgage-backed securities, and government agency debt.

Geopolitical tensions remained high, but investors were impervious to the potential effect of various conflicts on stock and bond markets. In August, Barron’s wrote:

“The biggest surprise of 2017 remains that geopolitical risk continues to not matter. Until Monday, North Korea’s nuclear missile program had again faded into the background as just another high impact/low probability risk with no discernible effect on market sentiment. Brexit, the changes in leadership roles in China after the 19th National People’s Congress, the possibility of a United States-China trade war, and the unpredictable nature of the Trump presidency are not weighing on stocks.”

The CBOE Volatility Index (VIX) keeps plumbing historic lows. The VIX reflects investors’ expectations for market volatility in coming months. The lower the Index reading, the lower volatility expectations are. The historic average for the VIX is about 19.

We’re still waiting for inflation to move higher. At the end of the quarter, inflation appeared to be heading the wrong way. The core Personal Consumption Expenditures (PCE) index, which is the Federal Reserve’s favorite measure of inflation, came in at 1.3 percent, year-over-year. That’s its lowest level since October 2015, reported Barron’s. The Fed’s goal is to have inflation at 2 percent. It has raised rates during 2017 in anticipation of higher inflation rates, but those higher rates have yet to materialize. 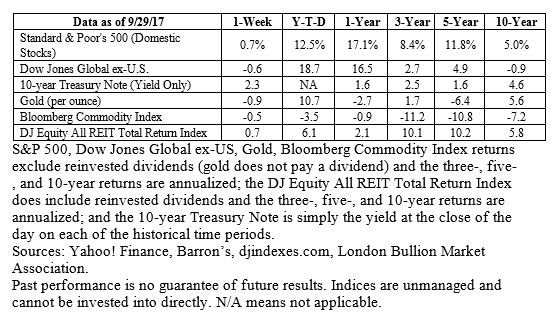 THE CASE OF THE SWIRLING EUROS. In mid-September, local authorities in Geneva, Switzerland were investigating an unexpected deposit. Reuters reported:

“…the first blockage occurred in the toilet serving the vault at [a] bank…in Geneva’s financial district, and three nearby bistros found their facilities bunged up with 500-euro notes a few days later…The cash was confiscated during the investigation and it was unclear who would get it if it was found to be lawful. There was no immediate reason to think it was dirty money...”

Whoever was responsible for flushing about $100,000 worth of 500-euro bills may have jumped the gun. The €500 note will be discontinued by the European Central Bank because authorities suspect it has been used to facilitate illegal activities, but production continues until the end of 2018.

The perpetrator hasn’t committed a crime, reported Bloomberg. While it’s illegal to mutilate or deface bills in the United States, that’s not the case in Switzerland. The European Commission isn’t concerned when small amounts of euro are damaged. Its rules for legal tender state:

“The destruction of small quantities of euro banknotes or coins by an individual should neither be prohibited nor penalized. The justification for the non-prohibition is the fact that the lawful owner of a banknote should be able to do what he/she wants with his/her own good as long as there is no impact on third parties.”

Why investigate if there is no crime? There’s nothing like a good mystery to occupy the mind!

* These views are those of Carson Group Coaching, and not the presenting Representative or the Representative’s Broker/Dealer, and should not be construed as investment advice.
* This newsletter was prepared by Carson Group Coaching. Carson Group Coaching is not affiliated with the named broker/dealer.
* Government bonds and Treasury Bills are guaranteed by the U.S. government as to the timely payment of principal and interest and, if held to maturity, offer a fixed rate of return and fixed principal value. However, the value of fund shares is not guaranteed and will fluctuate.
* Corporate bonds are considered higher risk than government bonds but normally offer a higher yield and are subject to market, interest rate and credit risk as well as additional risks based on the quality of issuer coupon rate, price, yield, maturity, and redemption features.
* The Standard & Poor's 500 (S&P 500) is an unmanaged group of securities considered to be representative of the stock market in general. You cannot invest directly in this index.
* All indexes referenced are unmanaged. Unmanaged index returns do not reflect fees, expenses, or sales charges. Index performance is not indicative of the performance of any investment.
* The Dow Jones Global ex-U.S. Index covers approximately 95% of the market capitalization of the 45 developed and emerging countries included in the Index.
* The 10-year Treasury Note represents debt owed by the United States Treasury to the public. Since the U.S. Government is seen as a risk-free borrower, investors use the 10-year Treasury Note as a benchmark for the long-term bond market.
* Gold represents the afternoon gold price as reported by the London Bullion Market Association. The gold price is set twice daily by the London Gold Fixing Company at 10:30 and 15:00 and is expressed in U.S. dollars per fine troy ounce.
* The Bloomberg Commodity Index is designed to be a highly liquid and diversified benchmark for the commodity futures market. The Index is composed of futures contracts on 19 physical commodities and was launched on July 14, 1998.
* The DJ Equity All REIT Total Return Index measures the total return performance of the equity subcategory of the Real Estate Investment Trust (REIT) industry as calculated by Dow Jones.
* Yahoo! Finance is the source for any reference to the performance of an index between two specific periods.
* Opinions expressed are subject to change without notice and are not intended as investment advice or to predict future performance.
* Economic forecasts set forth may not develop as predicted and there can be no guarantee that strategies promoted will be successful.
* Past performance does not guarantee future results. Investing involves risk, including loss of principal.
* You cannot invest directly in an index.
* Stock investing involves risk including loss of principal.
* Consult your financial professional before making any investment decision.