Things you may want to know…

Last Friday, Financial Times (FT) published, ‘Five markets charts that matter for investors.’ Among the issues addressed in the charts were:

When bond yields rise, bond values fall, and that makes rising interest rates quite a significant event for anyone who holds lower yielding bonds. In the United States, 10-year U.S. Treasuries moved to a seven-week high last week and then dipped lower following the release of the Federal Open Market Committee meeting minutes, reported CNBC.com.

“…S&P financials have gained some 6 percent, with tech sliding almost 4 percent. That still leaves financials lagging behind the S&P 500 for the year and well behind the roughly 17 percent gain for tech. A similar story has unfolded in Europe between banks and tech.”

“Several Wall Street giants have warned of weak trading revenue in Q2, continuing the lackluster trend in 2017…Still, bank stocks large and small have been leading in recent weeks, helped by higher bond yields and massive buyback and dividend plans.”

Last week, the unemployment rate in the United States rose from 4.3 to 4.4 percent. It was good news according to an expert cited by Barron’s, “…the rise in labor force participation indicates slack remains in the labor market.” That may be the reason wages showed little improvement. 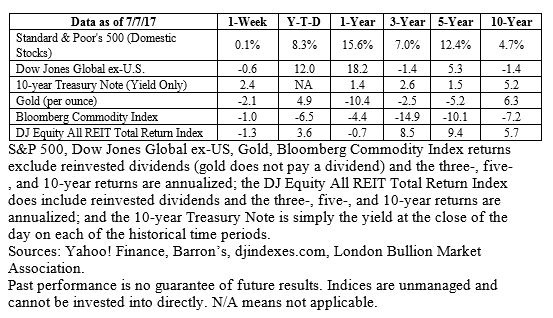 IT DOESN’T APPEAR TO BE COMMON KNOWLEDGE BUT there may be an affordable car crisis in the United States. The latest Bankrate.com Car Affordability Study found:

“…typical households in most of America’s larger cities don’t earn enough to afford the average new vehicle, under a common budgeting rule for buyers… The ‘20/4/10’ rule says you should aim to put down at least 20 percent of a vehicle’s purchase price, take out a car loan for no longer than four years, and devote no more than 10 percent of your annual income to car payments, interest, and insurance. If you can’t stay within those lines, you can’t afford the car.”

The only major city where a new car remains affordable is Washington, D.C.!

For some, the obvious solution is choosing a less expensive model. For others, the answer is buying a used vehicle. For the latter group, here’s some bad news: even an average-priced used car – nationally, the average price is about $19,200 – is unaffordable for households in eight of the 25 largest cities.

Leasing is also an option; one that may have helped create an oversupply of used cars. In July, Automotive News reported:

“…millions [of] cars that were leased two or three years ago, many of them used compact and midsized cars with low mileage, are heading toward auction lots and used car dealerships. That surge in supply threatens to depress prices for new and used vehicles, raising the risk of losses for automakers and finance companies on lease deals. It also undercuts the value of cars customers want to trade in for a new vehicle.”

The rising popularity of ride-sharing and car-sharing, and the introduction of self-driving vehicles, may also depress prices. In fact, some automakers have introduced their own ride-sharing services.

Weekly Focus – Think About It
“A man is rich in proportion to the number of things he can afford to let alone.”--Henry David Thoreau, American philosopher and naturalist

* These views are those of Peak Advisor Alliance, and not the presenting Representative or the Representative’s Broker/Dealer, and should not be construed as investment advice.* This newsletter was prepared by Peak Advisor Alliance. Peak Advisor Alliance is not affiliated with the named broker/dealer.* Government bonds and Treasury Bills are guaranteed by the U.S. government as to the timely payment of principal and interest and, if held to maturity, offer a fixed rate of return and fixed principal value.  However, the value of fund shares is not guaranteed and will fluctuate.* Corporate bonds are considered higher risk than government bonds but normally offer a higher yield and are subject to market, interest rate and credit risk as well as additional risks based on the quality of issuer coupon rate, price, yield, maturity, and redemption features.* The Standard & Poor's 500 (S&P 500) is an unmanaged group of securities considered to be representative of the stock market in general. You cannot invest directly in this index.* All indices referenced are unmanaged. Unmanaged index returns do not reflect fees, expenses, or sales charges. Index performance is not indicative of the performance of any investment.* The Dow Jones Global ex-U.S. Index covers approximately 95% of the market capitalization of the 45 developed and emerging countries included in the Index.* The 10-year Treasury Note represents debt owed by the United States Treasury to the public. Since the U.S. Government is seen as a risk-free borrower, investors use the 10-year Treasury Note as a benchmark for the long-term bond market.* Gold represents the afternoon gold price as reported by the London Bullion Market Association. The gold price is set twice daily by the London Gold Fixing Company at 10:30 and 15:00 and is expressed in U.S. dollars per fine troy ounce.* The Bloomberg Commodity Index is designed to be a highly liquid and diversified benchmark for the commodity futures market. The Index is composed of futures contracts on 19 physical commodities and was launched on July 14, 1998.* The DJ Equity All REIT Total Return Index measures the total return performance of the equity subcategory of the Real Estate Investment Trust (REIT) industry as calculated by Dow Jones.* Yahoo! Finance is the source for any reference to the performance of an index between two specific periods.* Opinions expressed are subject to change without notice and are not intended as investment advice or to predict future performance.* Economic forecasts set forth may not develop as predicted and there can be no guarantee that strategies promoted will be successful.* Past performance does not guarantee future results. Investing involves risk, including loss of principal.* You cannot invest directly in an index.* Consult your financial professional before making any investment decision.* Stock investing involves risk including loss of principal.