Stock markets in many advanced economies have been unusually calm during 2017, reported Schwab’s Jeffrey Kleintop in a May 15, 2017 commentary. The CBOE Volatility Index, a.k.a. the Fear Gauge, which measures how volatile investors believe the S&P 500 Index will be over the next few months, has fallen below 10 on just 15 days since the index was introduced in 1990. Six of the 15 occurred during 2017. The average daily closing value for the VIX was 19.7 from 1990 through 2016. For 2017, the average has been 11.8.

Investors’ calm is remarkable because 2017 has not been a particularly calm year. We’ve experienced significant geopolitical events. For example, the U.S. launched a military strike on Syria, and dropped its biggest non-nuclear bomb on Afghanistan. There have been terrorist attacks in Europe, along with discord in the Middle East. The European Union has been unraveling. The U.S. government has shown unusual levels of disarray, and the U.S. President’s passion for Tweets has stirred the pot.

Just last week, the future of Brexit was thrown into question when Britain’s snap elections produced a hung Parliament (no political party has a majority). How did investors react? Barron’s reported the European markets shrugged off Thursday’s election results and moved higher on Friday, offsetting some losses from earlier in the week.

In the United States, Former FBI Director James Comey’s testimony didn’t have much effect on stock markets last week, according to Barron’s. However, comments from Goldman Sachs cautioned the trade in big technology stocks, which have accounted for about 40 percent of the Standard & Poor’s 500 Index’s gains this year, was too crowded. The ensuing clamor resulted in the NASDAQ losing 1.6 percent for the week and the S&P 500 finishing slightly lower.

Geopolitical events do not appear to have the impact they may once have had. The Fear Gauge finished Friday at 10.7. 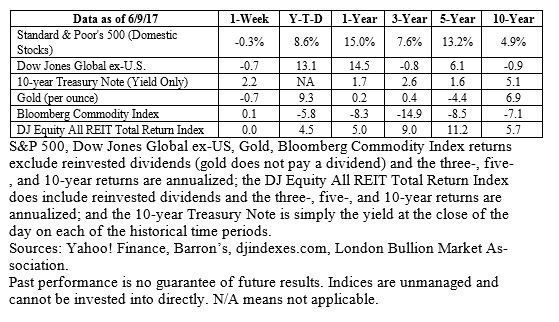 GUESS WHAT? THE FOUNTAIN OF YOUTH ISN’T REALLY A FOUNTAIN. For millennia, humankind has been looking for a means of slowing aging, maintaining health, and restoring youth and beauty. Greek mythology tells us that Hebe, the daughter of Zeus and Hera, could restore youth. In the 1600s, Juan Ponce de Leon was rumored to have searched Florida for the Fountain of Youth. In modern times, many people have turned to their surgeons and dermatologists with varied results.

The latest news in the search for youth and vitality involves metabolites. In 2013, a paper published by Harvard’s David Sinclair, along with other researchers, suggested it might be possible to reverse mitochondrial decay, which is thought to be a key driver of aging, by consuming nicotinamide riboside (NR) supplements, reported Scientific American. A 2015 guest blog post opined:

“If I were a middle-aged mouse, I'd be ready to spend some of the nickels and dimes I'd dragged off the sidewalk to try NR supplements. Even before Sinclair's paper, researchers had shown in 2012 that when given doses of NR, mice on high-fat diets gained 60 percent less weight than they did on the same diets without NR. Further, none of the mice on NR showed signs of diabetes, and their energy levels improved.”

In March of this year, Science published a paper that expands on prior findings. The research suggests it may be possible to help cells repair damaged DNA by restoring levels of an oxidized form of nicotinamide adenine dinucleotide (NAD).

NASA is supporting the work, according to ScienceDaily. If supplements prove effective with humans, it might help keep astronauts – who “experience accelerated ageing from cosmic radiation, suffering from muscle weakness, memory loss and other symptoms when they return” – healthy during a four-year mission to Mars.

“On street corners everywhere, people are looking at their cell phones, and it's easy to dismiss this as some sort of bad trend in human culture. But the truth is, life is being lived there.”
--Ze Frank, American online performance artist

* These views are those of Peak Advisor Alliance, and not the presenting Representative or the Representative’s Broker/Dealer, and should not be construed as investment advice.
* This newsletter was prepared by Peak Advisor Alliance. Peak Advisor Alliance is not affiliated with the named broker/dealer.
* Government bonds and Treasury Bills are guaranteed by the U.S. government as to the timely payment of principal and interest and, if held to maturity, offer a fixed rate of return and fixed principal value. However, the value of fund shares is not guaranteed and will fluctuate.
* Corporate bonds are considered higher risk than government bonds but normally offer a higher yield and are subject to market, interest rate and credit risk as well as additional risks based on the quality of issuer coupon rate, price, yield, maturity, and redemption features.
* The Standard & Poor's 500 (S&P 500) is an unmanaged group of securities considered to be representative of the stock market in general. You cannot invest directly in this index.
* All indices referenced are unmanaged. Unmanaged index returns do not reflect fees, expenses, or sales charges. Index performance is not indicative of the performance of any investment.
* The Dow Jones Global ex-U.S. Index covers approximately 95% of the market capitalization of the 45 developed and emerging countries included in the Index.
* The 10-year Treasury Note represents debt owed by the United States Treasury to the public. Since the U.S. Government is seen as a risk-free borrower, investors use the 10-year Treasury Note as a benchmark for the long-term bond market.
* Gold represents the afternoon gold price as reported by the London Bullion Market Association. The gold price is set twice daily by the London Gold Fixing Company at 10:30 and 15:00 and is expressed in U.S. dollars per fine troy ounce.
* The Bloomberg Commodity Index is designed to be a highly liquid and diversified benchmark for the commodity futures market. The Index is composed of futures contracts on 19 physical commodities and was launched on July 14, 1998.
* The DJ Equity All REIT Total Return Index measures the total return performance of the equity subcategory of the Real Estate Investment Trust (REIT) industry as calculated by Dow Jones.
* Yahoo! Finance is the source for any reference to the performance of an index between two specific periods.
* Opinions expressed are subject to change without notice and are not intended as investment advice or to predict future performance.
* Economic forecasts set forth may not develop as predicted and there can be no guarantee that strategies promoted will be successful.
* Past performance does not guarantee future results. Investing involves risk, including loss of principal.
* You cannot invest directly in an index.
* Consult your financial professional before making any investment decision.
* Stock investing involves risk including loss of principal.